Paddling with families and friends

Whoosh has always had family as a keystone in its operations, it was in July 2005 when we first decided that we would set up a new type of paddling club, we had been paddling with some great club and been involved in working with the local authority teaching canoeing and kayaking at HYMB in Cheshunt as well as running paddling and pool sessions with Baldock and District Canoe club when we decided it was time to set up on our own and try our hand at developing our own canoe club. It was the news that the Olympics would be coming to London and that the plan was to build the white water centre at Broxbourne  near to where we regularly paddled that was the inspiration- along with the need to develop a community of paddlers that was the inspiration to write to the national lottery for a sports grant to develop the club. 4 weeks after our first daughter arrived, we received a letter to help us fund some open boats for community paddling project .

It was about 2 years later that we where able to officially start the club. We started with just a couple of canoes when Whoosh started life in 2008, with the hope that we would be able to come up with a new concept in paddling for families. all the local clubs  nearest to us at the time where restrictive on what paddlers could do some clubs at the time where geared around either competition paddling, sprint and racing or centres which where for only adults- or only kids. It was hard to find a club where we could paddle with a young family and  friends, or head out on trips and have adventures together. We decided it was time to set up our own club and with olypic games heading to England and the birth of our first daughter imminent we knew that we would have to set up something ourselves if we where to paddle as a family into the future.

We decided it was time to set up our own club and with Olympic games heading to London and the birth of our first daughter imminent, we knew that we would have to set up something ourselves if we where to paddle as a family into the future.

We often get asked about the best way of paddling with a young family, often questions like when should we introduce our kids to paddling. We started paddling with our children whilst they where very young in using open boats but both Helen and I where coaches and we felt confident that we would be able to undertake a rescue plan of our children in the safe knowledge that we had a plan if we capsized or as it happened if one of our girls fell out of the boat.

We had taken both girls out for a summer paddle and our youngest decided to put one hand into the water as we paddled, followed by a second hand, next she was over the side of the boat and two little legs danggled momentarily just in reach before her bouyancy aid did its thing and a gurgerling little girl could be pulled back into the boat- words like plan for the worst  hope for the best come to mind as we headed swiftly to the next lock to undertake a change of clothes.

When paddling with kids its as much about the kids being water confident as much as the adults feeling happy in the boat themselves. I would always recomend having a paddle yourself to familierise yourself with the boats and equipment as the kids will pick up on how comfortable you are in the boat. In the event of a capsize on a shallow canal or navigation we where alway only likely to be a few metres from the shallow banks of the navigation and there is no risk of a long swim or moving water to contend with. 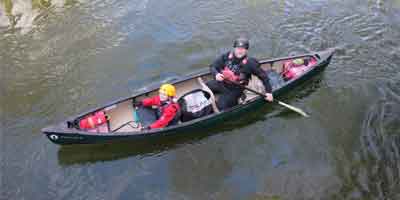